Fungus Gnats In Kittitas County Can Be Tricky To Deal With

As we get nearer the end of July, Washington’s summer is soon to segue into a healthy autumn. But with the last weeks of sunlight, many pests will resurge. The Kittitas County pest control experts at Prosite Pest Control are getting ready for this resurgence, and we want you to be prepared for anything. Fungus gnats might begin to appear in your houseplants or around your property, and we want you to know what to look for. 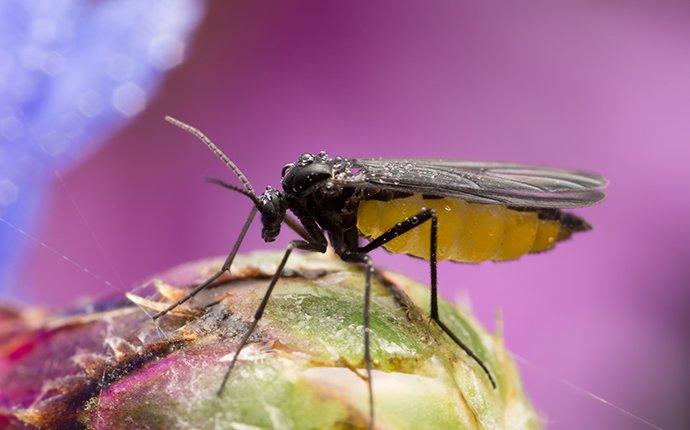 What Is The Difference Between Regular Gnats And Fungus Gnats?

This type of gnat lays its eggs in soil. The fungus gnat eggs release wormlike offspring that grow by feeding on the fungal spores and other microscopic sustenance. When they mature, there will be many of them, and they will choose to hang around plants and moist soil.

Adults have gray diaphanous wings shaped like the letter Y. If they aren’t hovering around plants, you might find them swirling around or resting near windows when daylight is streaming in. They are attracted to light.

How Big Are Fungus Gnats?

Fungus gnats are about the same size as fruit flies and regular gnats. Some of them can grow to be 1/2 an inch, while most others will be between 1/16 and 1/8 of an inch in length. Fungus gnat larvae will be wormlike, white, and have a shiny black head. They can be 1/8 of an inch long, so you can sometimes see them writhing in the soil. Often, though, they will bury themselves down, making it hard to spot them.

While they’re small, they gather in large groups, and a gnat problem can develop quickly. Being that they like houseplants, you might end up finding them hiding in soil or under leaves. They may also occupy spaces near drains or sunlit areas. As fungus gnat control professionals at Prosite Pest Control, we remind you that finding several adults could mean a heavy infestation is already at hand.

Even though they have wings, fungus gnats aren’t as apt at flying as other insects. They will fly in short bursts, or erratic up and down motions. In lieu of flying, these insects can hop around quickly from spot to spot due to their light weight. Ways fungus gnats move include:

The quick movements of these insects are comparable to fleas because they hop around quickly from spot to spot. If they are infesting your houseplants, they probably won’t use their minor ability to fly. Fungus gnats in soil will more often crawl along the surface, up plant stems, and across leaves.

How Can I Get Rid Of These Annoying Fungus Gnats?

In these summer months, it’s a good idea to deter fungus gnats from laying their eggs. Covering the top layer of soil with horticultural sand is somewhat effective. Also, inspect your houseplants often to see if you have any growing larvae or adults. Catching early signs makes it easier to get rid of gnats in houseplants before they become a problem.

If these fungus gnats get out of control, it can become too much to handle on your own. Professionals can help get rid of gnats once and for all. At Prosite Pest Control, we use the latest advances in technology to eradicate any pest infestation. Contact us today for immediate pest control service in the Kittitas County area.