Stinging insects are beneficial to the environment because of their ability to pollinate flowers, crops, and other plants; they are also considered to be beneficial because predatory species hunt and feed on nuisance insects- keeping their populations down. Stinging insects, despite their benefits, can become a huge problem for homeowners when they create their nests on, in, or near our homes. The most common species of stinging insects found in our area of Washington include yellow jackets, European paper wasps, and bald faced hornets. 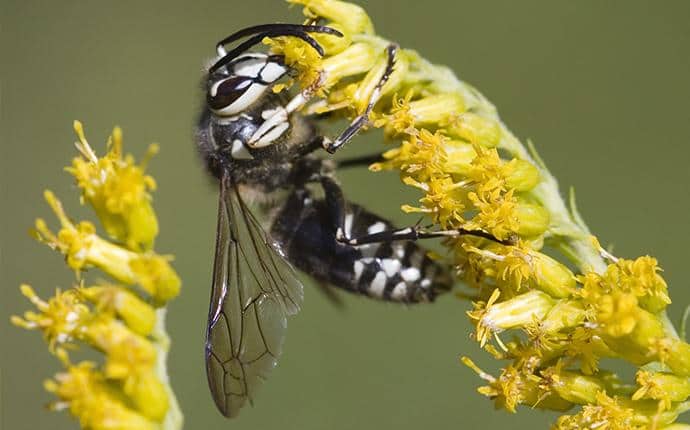 A large stinging insect, bald faced hornets are not actually hornets. They are relatives of yellow jackets and paper wasps and have long, think wasp-like bodies. Their bodies are black and they have an off-white pattern covering most of their faces. 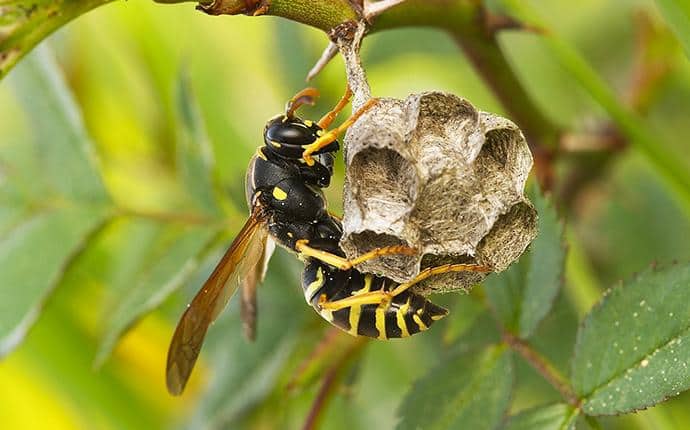 These wasps are semi-social and live together in small colonies. While they grow up to ¾ of an inch in length, paper wasps in Washington state can be distinguished from stockier yellow jackets by their slender bodies. 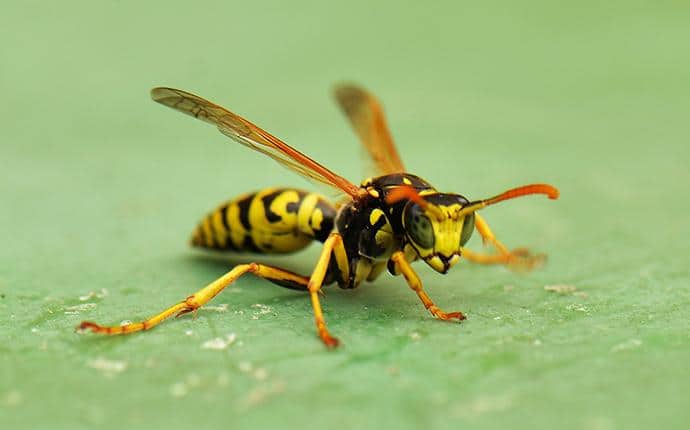 Very social insects, yellow jackets live together in large colonies with thousands of members. Workers may appear in combinations of yellow and black and white in black, they grow to about ½ inch in length.

Why do I have a problem with stinging insects?

Properties with lots of flowering vegetation, unsecured garbage cans, gardens, compost piles, and areas of standing water often attract stinging insects because they provide ample food and water sources. The big problem with stinging insects is that they create their nests in a wide variety of places- some of those places being in close proximity to people.

Where do stinging insects nest?

Where a stinging insect colony creates their nesting site depends greatly on their species. Yellow jackets nest in a variety of places like inside of tree cavities, in tree stumps, in the ground inside of holes dug out by other animals, under roof eaves or inside in attic spaces or behind walls voids.

European paper wasps prefer to create their unique upside-down umbrella shaped nests inside of small spaces, secure places like on the inside of pipes and gutters, inside of closed grills, in large bells, in electrical boxes and in the hollow spaces found behind walls. They also commonly build their nests underneath of roof overhangs and underneath of porches and decks.

Bald faced hornets like to place their nest up off of the ground in or on trees, utility poles, underneath of porches or decks, under roof eaves, in attics, on chimneys, and behind wall voids.

Yes, wasps have the potential to be very dangerous. Unlike honey bees who can only sting once, these stinging insects have the ability to sting their victim over and over again, repeatedly delivering painful stings and creating raised red welts. As if that wasn’t enough, their venom is strong enough to cause severe reactions in some people. Depending on the person the venom can cause a severe allergic reaction or even trigger an anaphylactic shock; if either occurs immediate medical attention should be sought.

How do I get rid of stinging insects?

How do I prevent problems with stinging insects?

To prevent problems with stinging insects on your property and inside of your home, we recommend:

Everything You Should Know About Paper Wasp Control In Yakima County

What To Do About Yellow Jackets On Your Yakima County Property

Yellow jackets are one of the most dangerous wasp species because they are so aggressive in defense of their nests. Don't risk setting them off.

What To Do About Yakima County Stinging Insects

Stinging insect colonies are dangerous to remove without the help of an extermination professional. To prevent wasps and hornets from taking over your property, seal all gaps in exterior walls, secure…

Worried about the possibility of a wasp or hornet infestation? A good place to start when it comes to pest prevention is research.